“And ever since I was a boy I never felt that I belonged...”This Strange Engine 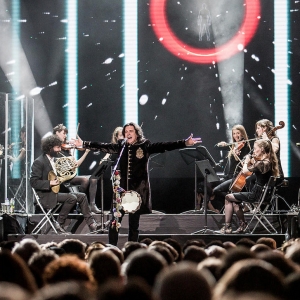 We are pleased to announce that we will return to the road in the UK and Europe next year.

The shows will feature the "In Praise of Folly" String Quartet plus Sam Morris on French Horn and Emma Halnan on Flute.

In October 2017, we played a sold out show at The Royal Albert Hall with this same ensemble, which fans and critics alike hailed as "one of the best concerts in Marillion’s history".

This concert has since been released on DVD, Blu-Ray, CD and Vinyl and topped the charts in 5 countries.

Marillion will be playing songs spanning their 14 album-career with Steve Hogarth, as 2019 celebrates 30 years of him joining the band.

h: “Has it really been 30 years?! Steve R tells me it’s his 40th anniversary so it’s a double celebration! It’s amazing to be in this position after all this time. We’ve added this wonderful six-piece to the band for this entire tour. They’re brilliant players, good friends, and the chemistry we have together has already spoken for itself. I thought we’d never beat that night at RAH... but there’s going to be two nights and two different RAH set lists this time, so let’s see what we, and our legendary fans can do."

We are still finalising the European dates which we will announce later this year but the full UK dates are as follows:

We please request that you do NOT buy any tickets from secondary ticketing sites and especially not for the Royal Albert Hall concerts.

When we went on sale for the RAH last year, we stated that there would be additional tickets released a couple of months before the shows and this will be the case again.

Don't give your money to secondary ticket selling sites for any concerts. These tickets are not always guaranteed to be genuine.

If you are on Facebook, there is a lovely group called "The Marillion Ticket Repository" where fans can buy and sell their tickets at face value, so please always use that as your first port of call for any sold out gigs.

We look forward to seeing you all on tour next year - the shows are going to be very special.

Have a good year.