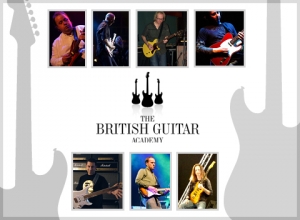 Hi, rehearsals for the conventions are going really well. They should be amazing!

I'll be giving the first of my British Guitar Academy clinics along with three other players in the next few weeks at the Court Theatre in Tring, Herts.

The doors open at 1.30pm with the clinics running from 2pm to 6pm.

Daniel Steinhardt - Dan Steinhardt is our resident tone guru and co-founder of TheGigRig.com, a company that designs systems used by many internationally renowned artists. Dan also writes for ‘Guitar Buyer’ magazine. Dan has played with MAX SHARAM for many years. His latest musical project, TIN SPIRITS teams him up with XTC’s axe toting genius Dave Gregory.

Tickets available now from http://www.wegottickets.com/event/107350 it should be a great day for anyone who plays the guitar or is thinking of playing.

Hope you can make it.